From Purple's Collection
Jump to navigationJump to search

The Dictaphone 4250 is a dictation recorder from around 1985 made out of aluminium. This recorder was quite advanced for the time and offered a useful feature called letter cues.
These cues allowed you to quickly fast-forward through the tape and have it stop at each cue, making it easier to find separate recordings.

These recorders were commonly used for executives to record (small) conferences or letters, which would later on be written out by a transcriptionist.

This recorder uses (one of) the smallest cassette(s) available called the "pico-cassette", the size of this cassette is 25x36x4mm 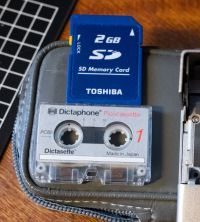